Good friend Susie Trial has agreed to share with us how she spent a recent morning. Enjoy! and let me know what you think. 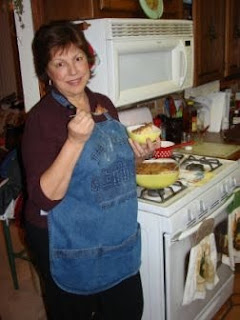 An arctic blast of wintry weather keeps me off the back roads today. Instead, I wander into my kitchen hoping to rally the heart of the home toward some wholesome goodness in order to turn dampened spirits around.

I spy a loaf of French bread, which has been all but forgotten between chips, popcorn, chicharones, and a half eaten loaf of sandwich bread on top of the ice box. Not a good place for bread. The ice box sends heat up there from the compressor just warm enough to turn bread stale and moldy. I need to rescue the French bread pronto. Freezing wind, rain and even snow, a rarity here in San Antone, made this day a special one. I determine that this crusty hunk of yeast and flour needs a special touch. I can think of nothing better than to make a generous batch of Bread Pudding to ward off the icy wet conditions outside.

As the cold weather punches through and begins making news, my phone is warmed with callers, reporting they, too, are making Bread Pudding. Could this be coincidence? I am struck with awe that many other good-hearted Texan women are transforming their cast-off crusts into a delectable delight.

In homes across the hills, prairies and piney woods, the powerful sweet custard aroma works like magic as it seeps under doors and out leaky windows. The finished pudding evokes smiles and watery salivary glands from husbands and children and all who enter there. These homes complete a picture of cozy comfort and warm, full tummies as Texan wives and mothers use innovative skills, a few staples from the larder, and a lonely crust of bread to transform a winter day. 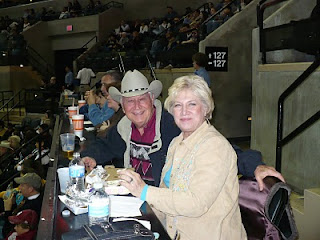 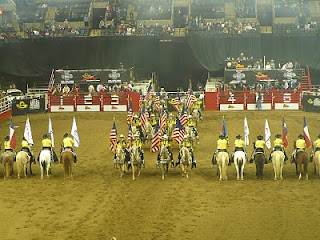 Last week I attended the San Antonio Rodeo with friends J.R. Huddleston and Audrey Parish. Thanks to their arrangements, we had premium seats close to the action and yet up far enough in the stands to have a bird’s eye view.

My favorite part of rodeo is Mutton Busting. For those of you who don’t know: In the Mutton Busting event, rodeo officials help four to six year olds into helmets and padded vests before lifting them to the backs of sheep. The kiddos grab a double fist of wool and blast out of a tiny chute. Most fall off in only a second or two. Some stumble and stammer in the roar of a cheering crowd, wondering what all the fuss is about. A determined five year girl rode her sheep around the entire arena. When officials caught up to her, she threw her arms up in triumph. Precious. The crowd shot to their feet to applaud in thunderous admiration. Last Mutton-Busting Girl Riding, I thought to myself, a history in the making. And, not a bad title for a book.

Truth be told? The grown up part of rodeo makes me nervous. The sight of handsome, triple-starched cowboys riding thousands of pounds of beef and horse flesh, subjecting their strong young bodies to all that jerking, flinging, and stomping makes me wince. They don’t bounce from the arena floor and throw their hands up in triumph, even when they have scored big. Instead, they limp away holding onto injured shoulders, elbows or hips. They slump and amble like old men and I wonder what kind of physical pain they’ll have to endure ten, twenty years from now. Like the little ones, they seem dazed, but for very different reasons. The line from Willie Nelson’s song, “Moma, don’t let your babies grow up to be cowboys,” takes on new meaning.

I can’t imagine the kind of ambition that puts those young men on the backs of bucking, aggravated animals. Are they the last true Mavericks? Is it lust for danger? Or, is it ego, the idea of besting a 1500 pound spinning bull and wearing a six-inch belt buckle to prove you did it?

I’m going back to the rodeo grounds this week. I’ll watch and listen, glean any bit of insight about why cowboys do what they do.

During the Johnson Space Center’s hey day, I lived in Clear Lake City within shouting distance of NASA’s back gate. I’ve always felt fortunate to have experienced the nuts and bolts of space exploration right in my own neighborhood, though most of it was by osmosis. At the same time I found history fascinating and wondered about its influence on the present. Living so near all that scientific juice gave me pause to think that time, Past-Present-Future, could be thought of as all inclusive.

The idea took on weight when, thirty-plus years after moving from the Clear Lake-NASA area, I was asked to travel there to meet with a group of high-school seniors who were to train for the K-Bird in order to put their science experiments on board a Shuttle flight. My assignment was to follow the students around for a week and write about their experiences.

When I arrived at the extended-stay hotel address, I was stunned to realize it sat smack in the middle of my past, on the vacant lot where my elementary school-aged boy used to practice baseball. Before checking into the hotel, I drove down clean, tree-lined streets trying to find the house where I had lived. Back then there were no trees, just boxy houses lined up along ribbons of paved prairie. In spite of the fact that I had few visual points of reference to find my little house in the maze, memories came flooding back. I passed the elementary school and remembered the deep heartache of kissing my kindergartners good-bye before they bounced out of the car. It was to be the first of many letting-go lessons that all parents have to master sooner or later. Had I really lived those elusive and far away days of diapers and crayons, ballet lessons and baseball practice? Drivers’ Ed and prom dresses?

I finally found the house where I’d lived those long years ago. It was exactly as I’d remembered it except for the enormous trees! They’d been mere twigs when I’d planted them. My boy had dubbed the Arizona Ash third base and the Post Oak home plate. I never thought they would survive, let alone thrive. The sound of my children’s high pitched voices eventually began to echo back to me from the past. I recalled pots of homemade soup on rainy, cold winter days trapped inside with squirming children and peanut butter and jelly sandwiches and Kool-aid in the simmering heat of summer. And then, there were the puppies, guppies and kittens buried in the back yard after failed attempts at trying to explain death to a four year old.

And so now I wonder: Is life simply an entire existence housed solely within our skulls? After all, a young mother from long ago still lives in me, as does an insecure bride and a sniveling school girl. That’s the Past. The Present is what I continue to add to the Past. My Future, while it keeps getting shortened, is somewhere down the next Back Road.

The seniors I accompanied to NASA that week broadened their horizons enormously. And so did I.

I read in a newspaper recently about a woman who travels twice a week from a town near the Canadian Border to the city where I live in South Central Texas to attend college classes. That’s over 1500 miles and involves a substantial road trip to the airport near where she lives, and then a rented car on the Texas end of her flight. I was dumbfounded. I know people who have to have solid reason – like starvation – to get out of a chair and into a car for a three mile trip to the grocery store.

As it turned out the woman considers her actions a “gift” to herself. At retirement she ended up devoting years to caring for a niece, ill sister, and aging mother. After her sister and mother died she “fought restlessness” and so decided to fulfill a life long dream of getting a doctorate degree.

Since I’m a writer – and other writers will understand this well – the first thought that came to my mind was how in the world could she afford the travel expenses. The article said the woman wasn’t wealthy. But after a little more thought, I realized that I sit here day after day pounding out narratives, stories, snippets that I know will never make it to a printed or e-page. Am I foolish for doing it? I think not. Writing connects me in an unexplainable way to life waves out there. Life waves are invisible pulsing arcs of knowledge sort of like sound waves. You hear sound waves. But you feel life waves. It is that feeling, with no particular expectation attached, that spurs me on.

Imagine what it would be like to spend a day with the Traveling Student, someone who invests in herself in order to turn up the volume of her life waves. I hope she knows I’m here at my computer feeling the spirit of her courage and determination..

Schedule Karen to speak at your event, service club or book club meeting, by emailing: kcfitzjerrell@gmail.com
SKYPE is available for out of state events, club meetings.

Type "Pam" in the email subject line or use the Contact tab.

Theme by Anders Noren — Up ↑